Last week in April master students of Economics and Finance had a lecture on Economic and Monetary Union held by dr. Dániel Homolya, Karoli Gáspár University in Budapest. The lecture was part of the course Economic Policy by prof. dr. Štefan Bojnec. 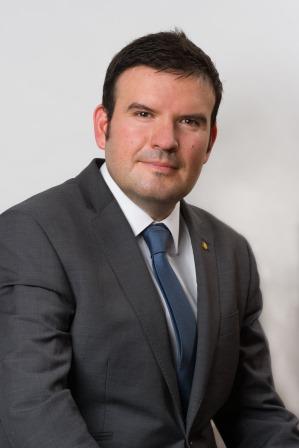 Dr. Dániel HOMOLYA is financial economist, Head of Financial Risk Management at the MOL Group, senior lecturer at the Károli Gáspár Reformed University in Budapest, Hungary. He gained his PhD at Corvinus University of Budapest on field of risk management. Previously he gained experience at Central Bank of Hungary on field of financial stability and monetary policy, and also he worked at Erste Bank Hungary.

The main focus of the lectures was the Economic and Monetary Union (EMU) in Europe to highlight roles of European Central Bank (ECB), challenges and relation with Central and Eastern European (CEE) countries. First, in introduction, costs and benefits of a Monetary Union were approached, and basic setup for EMU was highlighted. Second, regarding ECB, it was reviewed the basic balance sheet items of ECB, basic figures, and monetary policy objectives and instruments of ECB with special focus on non-conventional (quantitative easing) tools. As third topic, the fiscal issues in EMU were touched with focusing how budgetary union could influence the operation of a monetary union. As a fourth topic, the lecture covered the financial stability and banking supervision issues, the new European banking and financial regulatory and supervisory framework was touched (e.g. European Systemic Risk Board, European Supervisory Authorities: European Banking Authority, European Insurance and Occupational Pensions Authority, European Securities and Markets Authority, ECB's new supervisory mandate) accompanied by financial market issue. Finally, the topic of euro area accession and CEE countries highlighting the different experience of already joined countries (Slovenia, Slovakia and Estonia) and challenges and different setup of not yet joined countries (primarily the Czech Republic, Hungary and Poland). As a practice during the lectures, it has been done a "simulation" to have "pre meeting" of ECB Governing Council meeting to create own view, what the students would do if they would be member of ECB Governing Council.